On the 22nd Anniversary of the STORMWORKS Chapter 3: WAIT of the WORLD Recording
with Maurice Hamers & The Marine Band of the Royal Netherlands Navy

The echoey sounds of stretching and cracking ice filled the inlet.  The surround had become an arena, an eternal, unearthly battleground.  The white whale broke the surface slowly.  Inching forward, it broke the ice ahead of it, sending mountainous shards into the starry night.

Carney clutched his ATK.  He spun to Isaac standing at Carney’s right. “Just another hill, Isaac.  Just another damned hill!”

Carney ran at the immensity, screaming as he did at Fort Wagner.  He threw the harpoon with great impetus and David-like faith.  The ATK stabbed into Moby Dick’s advancing head, dead center, about thirteen-feet up from its upper mandible.  Isaac wondered if the lance had penetrated the distal sack. 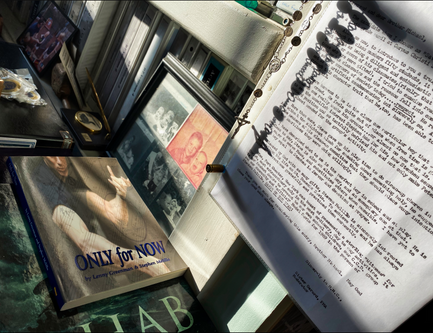 I’m a Composer.  Before I studied at the Boston Conservatory of Music, I sat in the back of Corpus Christi Church.  At age 19, and in one long sitting, I penciled, Only for Now.

“That’s it,” I thought.  I have divested myself of the burden.  “Now, I must learn about Music.”  Years later, I composed Ahab, for Actor & Wind Ensemble.  We made a fine recording of it in Leipzig, ten years to the day after the Wall had come down.  (Stormworks Chapter 2: Wende.)  Actor, Kurtwood Smith enacted all of Ahab’s lines from Herman Melville’s Moby Dick.

Compelled by a single line from Melville's Moby Dick, I took to book-writing again and composed Ahab, a Love Story.  “Good!” I thought.  "Mission accomplished.  Back to Music."

Death to Moby Dick, a Love Story, a Novel from my heart to yours, is available now via Amazon, Barnes & Noble, Westwood Books, and other online booksellers..

If you haven’t read Ahab, a Love Story, and you are a fan of Love Stories, Adventures on the High Seas, and Melville’s Moby Dick, this too is a must-read.