A Pictorial Essay in the Miracle of Life!

This evening I received this screenshot from Petra Buchmann, Musician in Stadtkapelle Wangen conducted by Tobias Zinser, the ensemble that will deliver the premiere of The Concerto for Tuba, "The Strong Soul", rendered by Andreas Martin Hofmeir on 22 October 2021.  (Petra is also the ultimate PAD Bass player and played on the “Dwegons & Leprechaun” Scoring Session in Sofia, Bulgaria.)

Petra sent this iPhone photo from her stand. 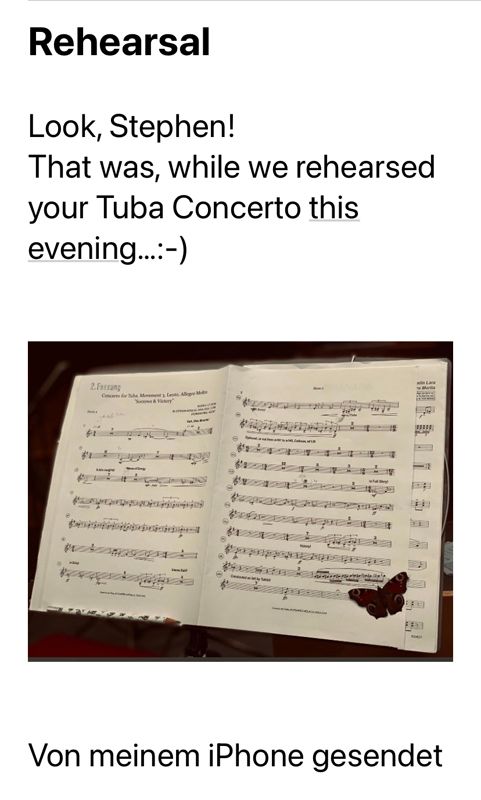 The moth was a bit dark, but looked strangely familiar.  Here is what Petra didn’t know.

Fifteen (15) years ago, in October of 2006, I ventured to Austria for the premiere of LAST WORLD STANDING, the Heroes of Peace.  Gerhard Reischel and I went ‘underneath’ the Brucknerhaus, there to see:

The crypt of Anton Bruckner. 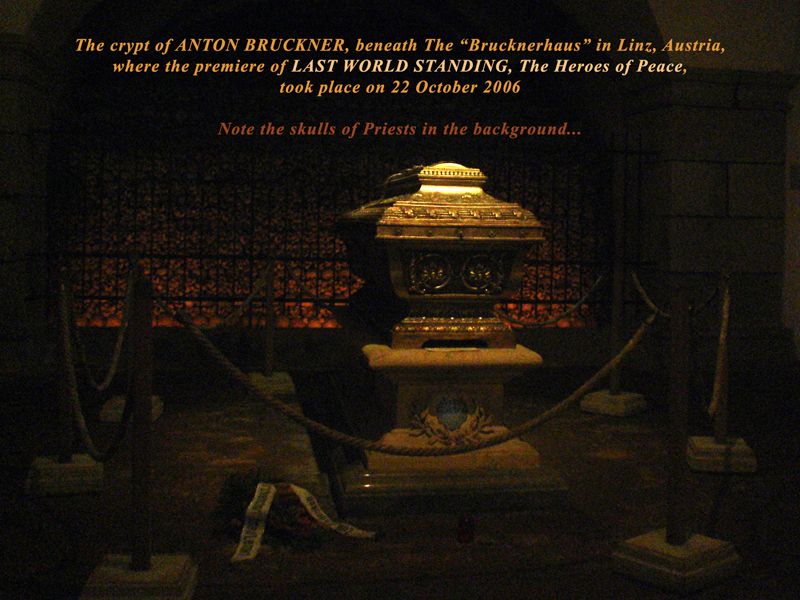 These are the Skulls of Priests that surrounded the crypt of Bruckner. 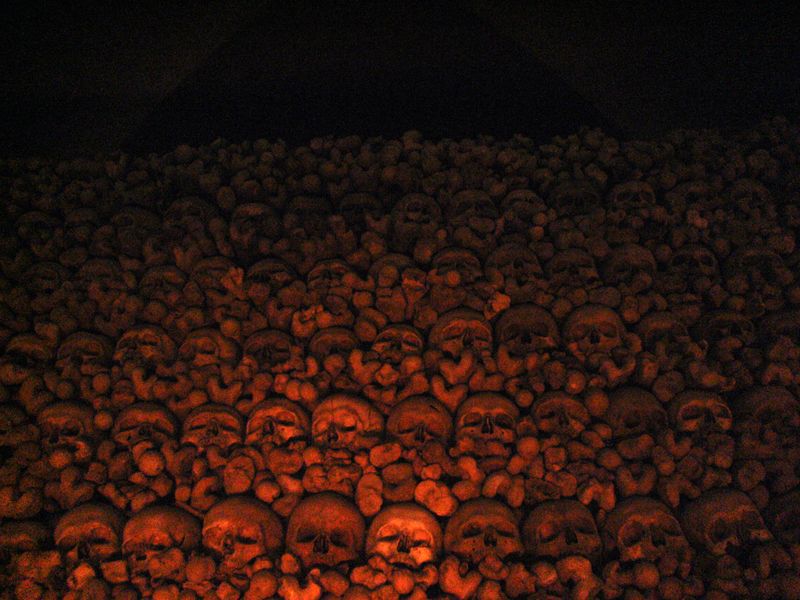 This is Gerhard Reischel, (aka The Good Doktor!). On this trip, he kept referring to me as “Bruckner”.  During the recordings of Chapter 21, he would look at me and lip, "Brrrook-nuh."

Of special SYNC-note is that his DAD was a POW of the Americans in WWII.  The piece we were about to premiere contained GRAPHIC images of Concentration Camps.  The Audience would be filled with people whose parents and grandparents were literally on BOTH sides of the war, and who still lived near to those camp-sites. 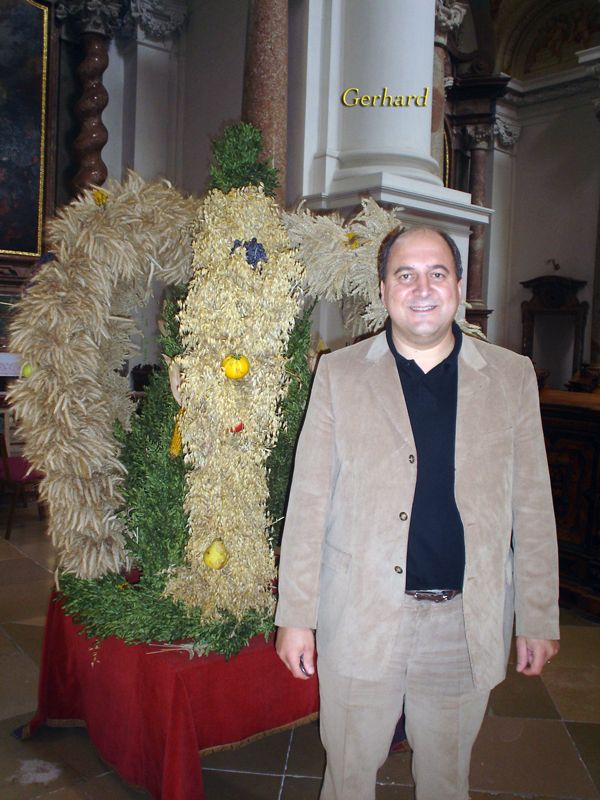 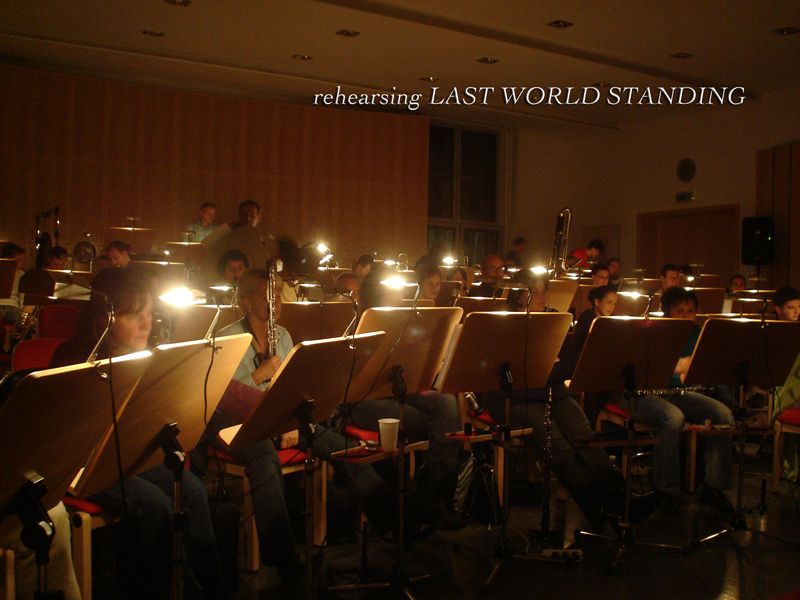 Another photo of the rehearsal.  This is the same ensemble that won a worldwide competition playing the piece, “MUSASHI,” also in 2006. 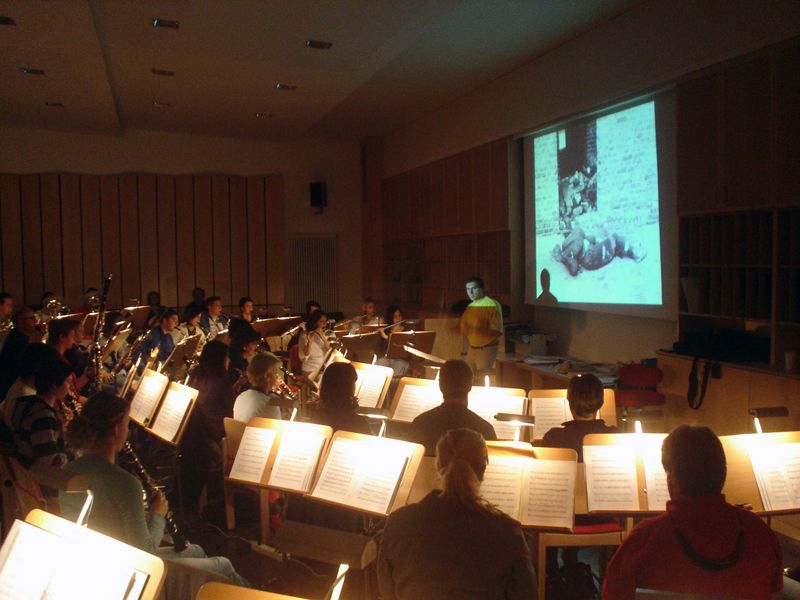 At the hotel, I was in Room 33.  Not surprising.  I think if I stopped seeing all of these 33s and 333s, THAT is when I’d be surprised!  One day, I’ll write the "333 Novel" and perhaps fully explain the significance of these numbers in all of the “Storm” works! 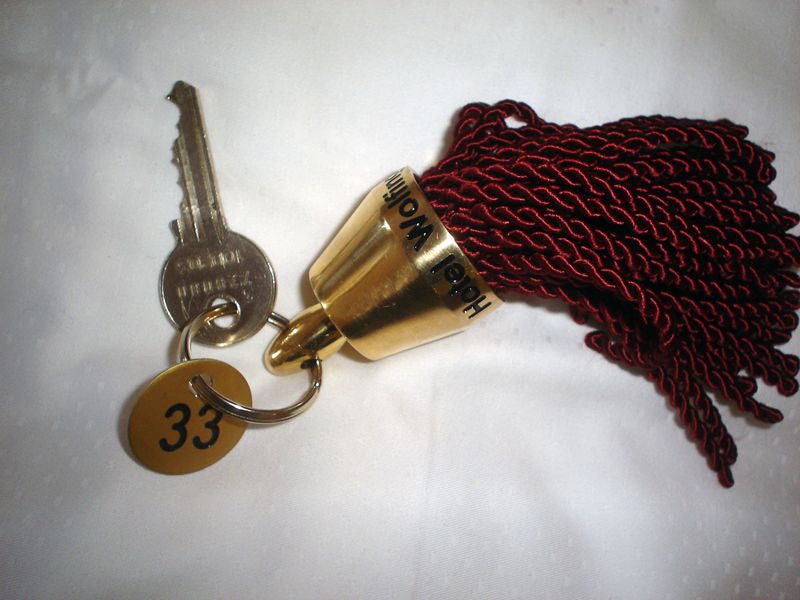 In my room, suddenly, a moth appeared on the curtain. 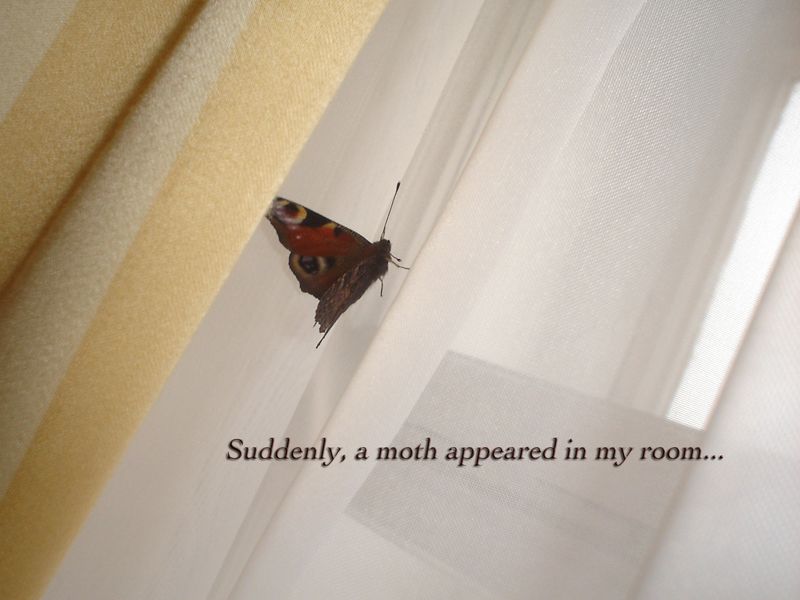 What an interesting creation!  Well, I don’t know about you, but I instantly saw the SKULLS in the wings, or perhaps the ‘death-mask’ of Bruckner! 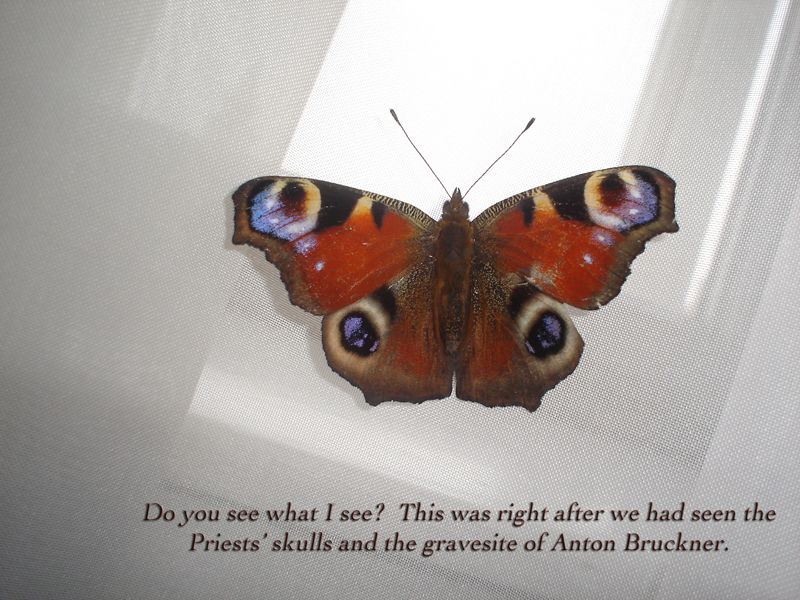 The Moth flies to Freedom! (Yes, a crazy shot with a low-res camera!) 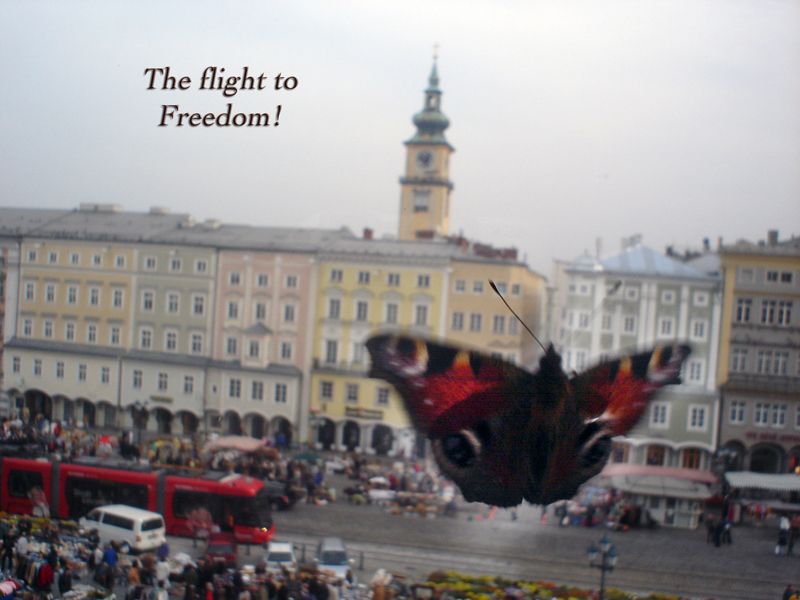 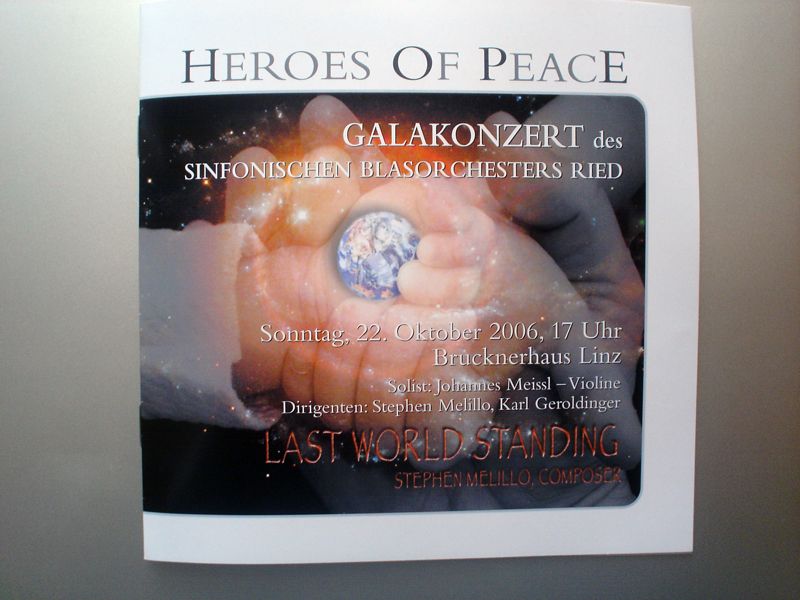 In the first part of the Concert, they played these pieces: 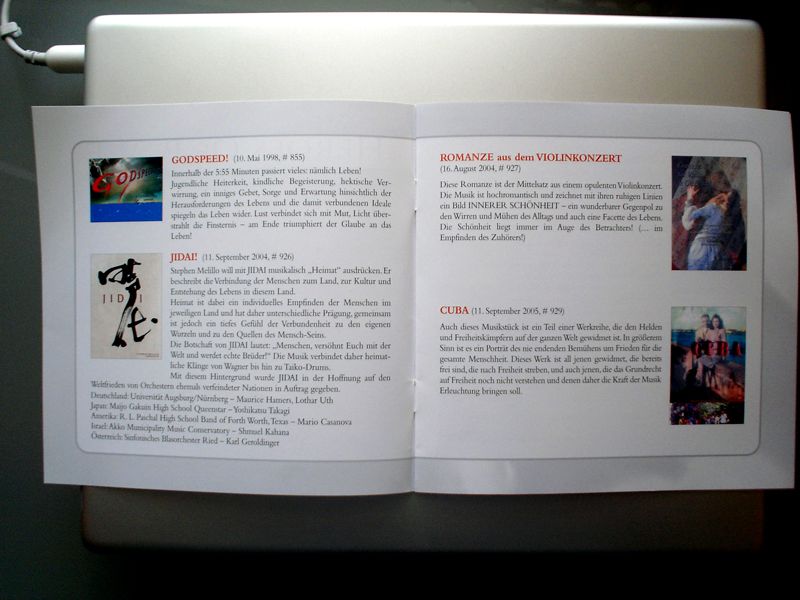 And then, in the 2nd part, the 33-minute LAST WORLD STANDING:  (This piece alone, is yet ANOTHER large STORMWORKS Story™!  You must investigate it one day!) 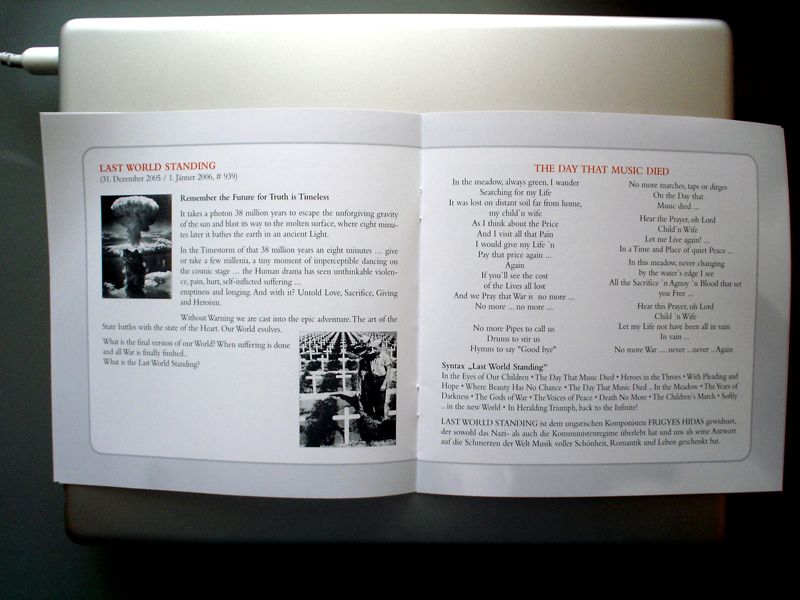 Getting ready for the premiere that night, on 22 October 2006.  A Percussionist is controlling the flow of Photos.   I call this PHOTORhythm™.  It was a new, innovative, ground-breaking  technique “premiered” with the Music that night in 2006. 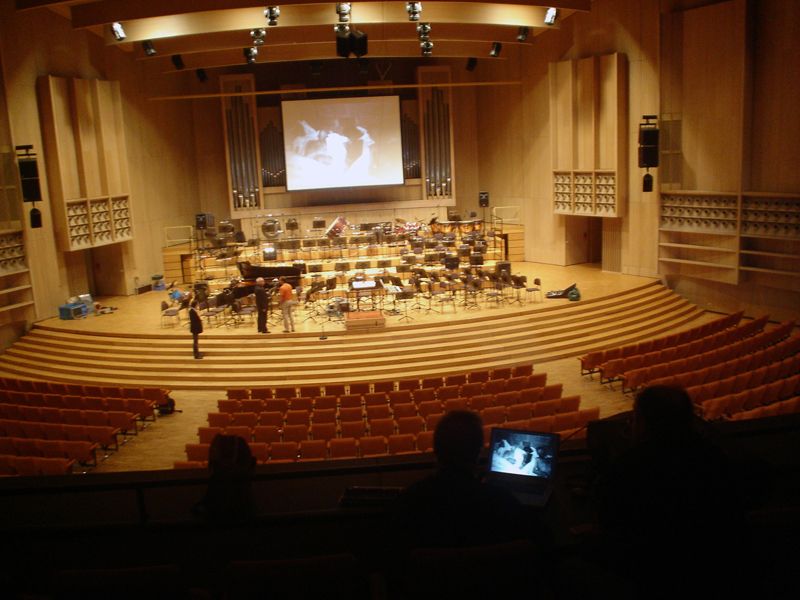 Another photograph of the stage at The Brucknerhaus. 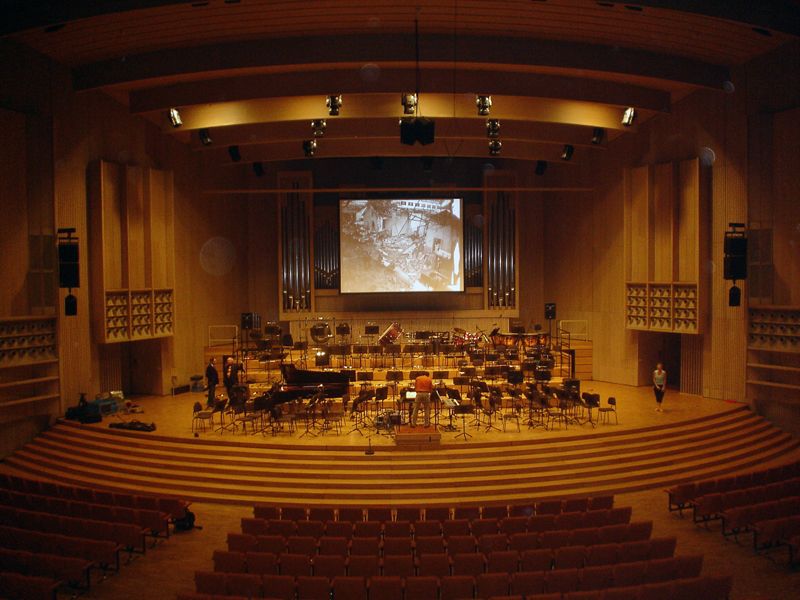 Taken during the concert, which involved, Actors, Singers, Dancers, Storytellers, Films and Slides. 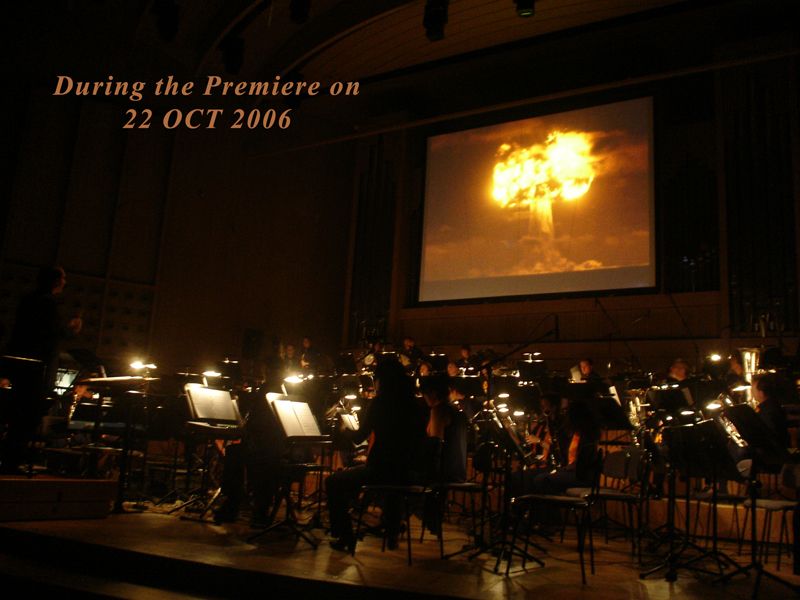 At the conclusion of this 33-minute work, and from an audience Karl warned me, “would be very Austrian and reserved,” came an 18-minute Standing Ovation. 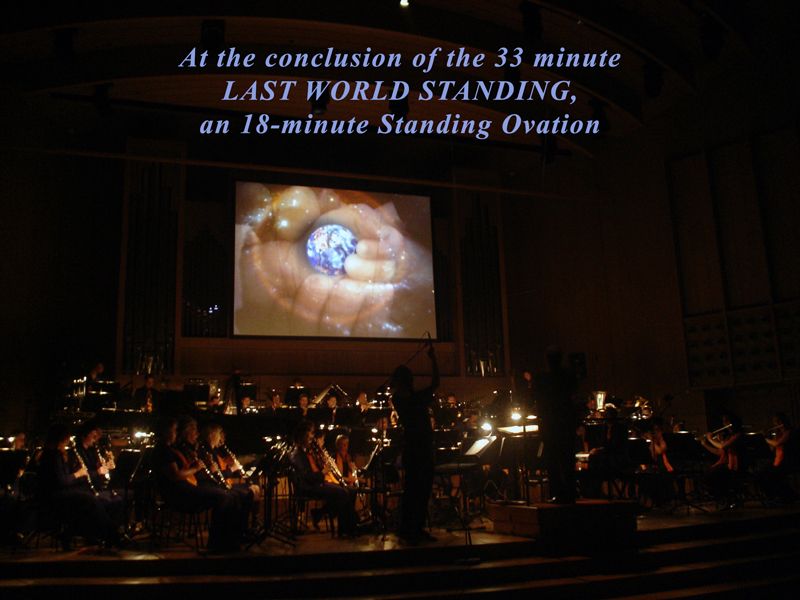 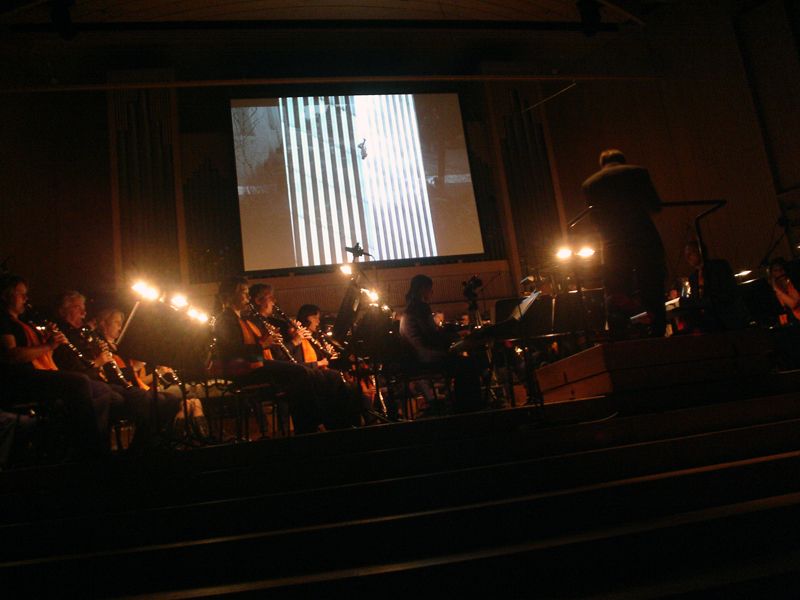 This photo was snapped at random as literally 1000 photos streamed by in PHOTORhytm™:

Here is the SYNC.  LAST WORLD STANDING is the Sequel to “Kakehashi: That We Might Live,” a 70-minute work inspired by and dedicated to the Defenders of Bataan and Corregidor during WWII in the Pacific.  This work was recorded by 143 World-Class Japanese Military Musicians in 2005 for the STORMWORKS Chapters 5:8 Album: WRITINGS on the WALL.  The photo snapped here is from The Bataan Death March.

Remember that Gerhard’s Dad was a POW of the Americans.  Remember too, that what inspired me to compose both Kakehashi: That We Might Live and Last World Standing were the ex-POWs.  We had Breakfast every first Wednesday of the month for over 10 years… at a place called “Bunny’s.” 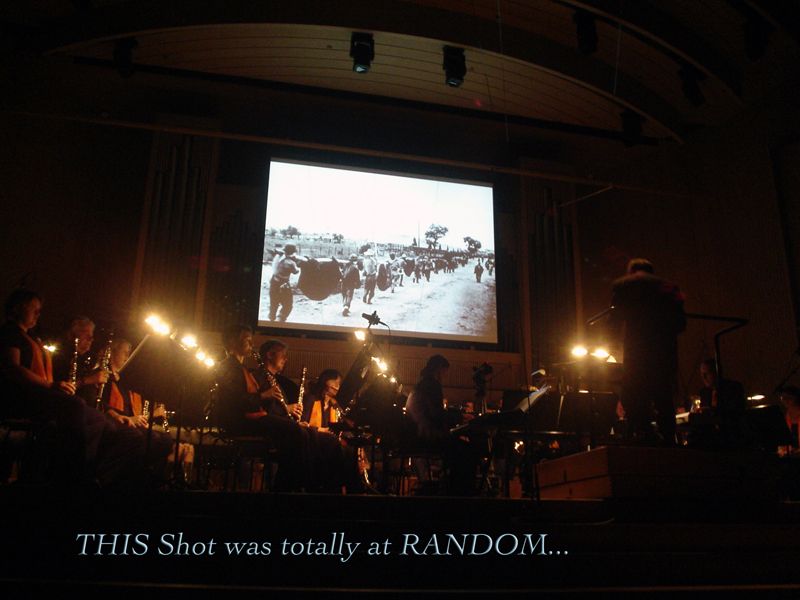 And what were the odds of seeing THIS restaurant that same night!?  In Austria?  Strange?  Weird?  Miraculous?  SYNC! 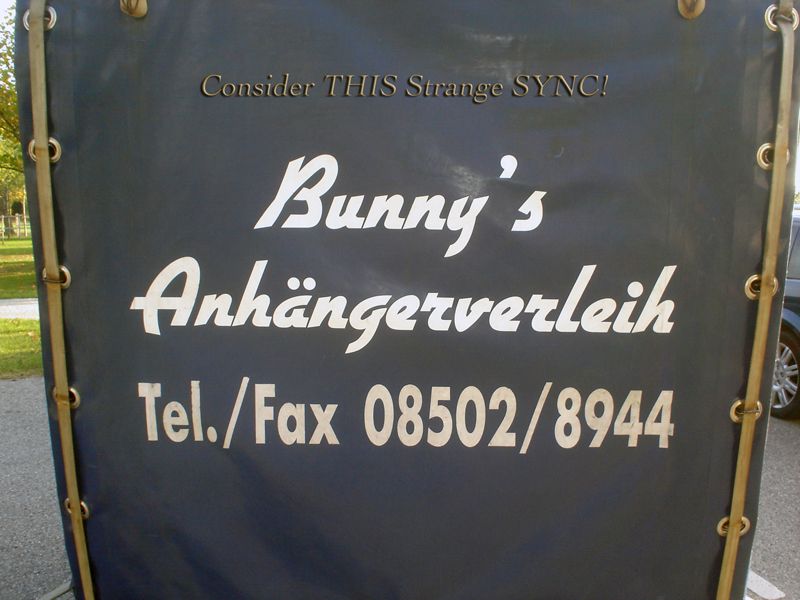 But now let’s come full circle, back to Petra’s Photo from the Rehearsal of “The Concerto for Tuba, the Strong Soul” which will premiere 22-23 October 2021, exactly 15 years to the day on which LAST WORLD STANDING premiered in The Brucknerhaus in Linz, Austria.

AND, keep in mind that the concerto was SUPPOSED to premiered last year, but was postponed to this new date because of the pandemic. 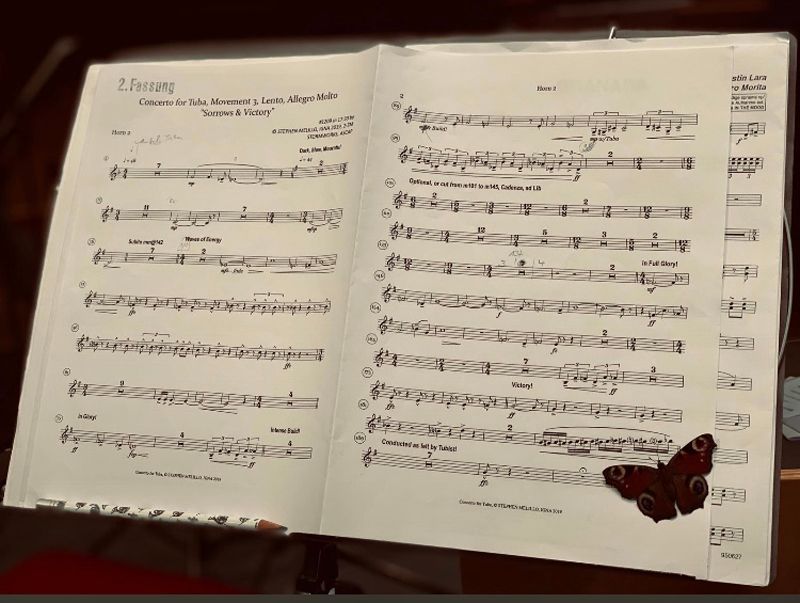 Let’s ZOOM in on that moth and lighten it up a bit: 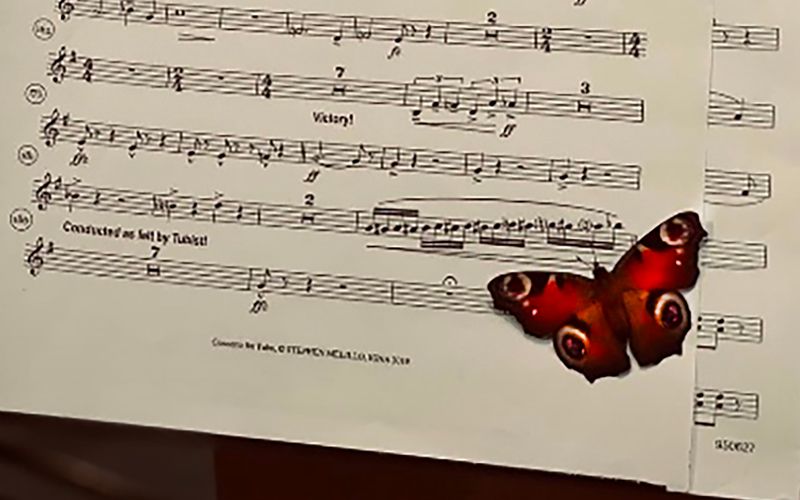 You can see that this IS “The Bruckner Moth.”

So, what do you think, a bunch of mere coincidences, lining up perfectly with Premieres and Purposes and Photos and Pandemics and Restaurants and Dates and Novels and Numbers and Rehearsals and Moths and WINGED CREATURES? (See the cover of The Concert for Tuba!! Chapter 89) 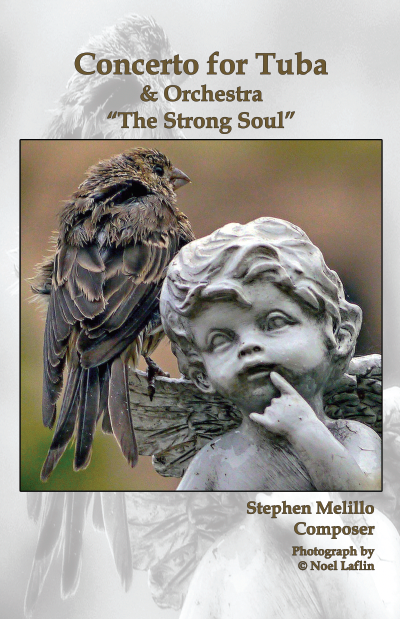 Or is something else going on?  Something Profound, Spiritual, God-given?  SOMETHING TO BE SHARED!? Welcome to STORMWORKS, of which THIS is but ONE Story!

There are many… and if indeed you would like to read about the most AMAZING layers of “coincidence,” please find and read, DEATH to MOBY DICK, a Love Story.  The History is completely real, and yet, the Story discusses all of the things going on RIGHT NOW in our world, and to such a degree that you would have to conclude it was written AFTER the pandemic… but no, it was all written 1 year before the pandemic, in time for the 250th anniversary of Beethoven.

Enjoy the Photos and the Story and the Wonder of it all & Godspeed!  S 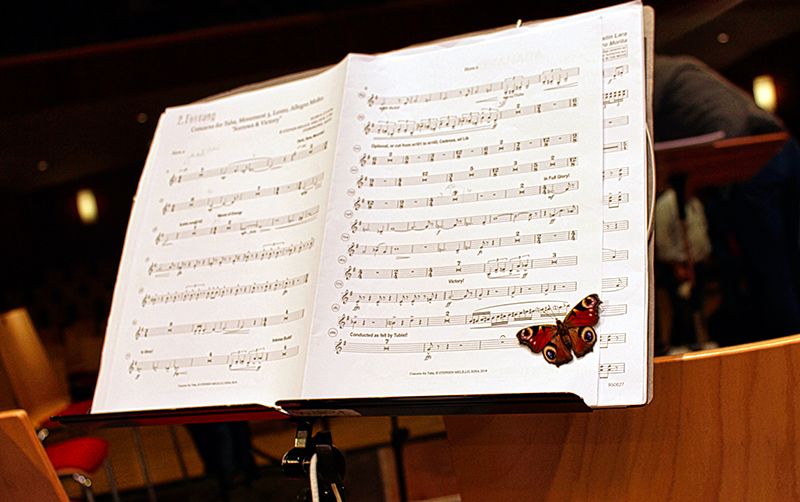 Have a Great Premiere of The Concerto for Tuba, "The Strong Soul!"